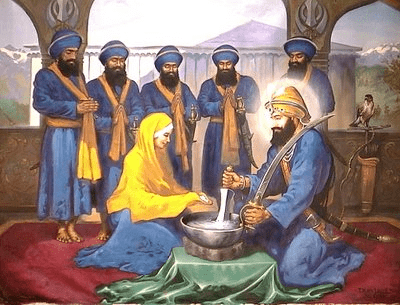 Skikh history, The honour blessed to her by the Tenth Nanak, Guru Gobind Singh Ji. The Guru blessed her with the honor of instilling the first baptism (amrit) with sweetness to balance its fierceness. On the baisakhi of 1699 when the First Amrit Sanchar was prescribed to the khalsa by the Guru himself, Mata sahib kaur ji participated in the ‘sewa’ of ‘Amrit Sanchar’ by adding sugar wafers (pataasey) to the ‘amrit’. When a Sikh is blessed with baptism in steel at the time of receiving ‘amrit’ known as the gift of ‘khande baate ki pahul’ he/she is told that your father from now onwards is Guru Gobind Singh Ji and your mother is Mata Sahib Kaur Ji. Mata ji guided the Khalsa Panth through the period of crisis many a times during the course of history and issued eight ‘hukamnaamas’ in the name of the Khalsa.
Mata Sahib Kaur Ji, who is also called Mata Sahib Devan Ji, was born on the 1st November 1681 in a village called Rohtas, District Jehlum, in West Panjab, (now in Pakistan). Her mother’s name was Mata Jasdevi Ji and father’s name was Bhai Rama Ji. Her father, who was an ardent sewak (devotee) of Guru Gobind Singh Ji, influenced her to the extent that she wanted to devote her whole life in the service of the Guru Sahib.
According to Folks, From her childhood, Mata Sahib Kaur Ji was a sweet and quiet natured girl. Because of the religious atmosphere at home, she was deeply influenced by Gurbani during her formative years. It is possible that in her childhood she might have seen Guru Gobind Singh Ji at Sri Anandpur Sahib during the visit of her family. She had inherited humility, love and sacrifice to humanity and devotion to Waheguru.
When Guru Gobind Singh reached Abchal Nagar (Sri Hazoor Sahib), he sent Mata Sahib Kaur Ji to Delhi and gave her five weapons of the Sixth Nanak, Guru Hargobind Sahib Ji, for safekeeping. These weapons are today displayed at Gurdwara Rakabganj in Delhi. Mata Sahib Kaur Ji, passed away before Mata Sundri Ji. She left for heavenly abode at the age of sixty six in 1747 and her last rites were performed in Bala Sahib, Delhi.
Mata Sahib Kaur college of Nursing commemorates the Mother of the of the Khalsa Mata Sahib Kaur Ji and pays homage to the Great Mother by dedicating a prestigious woman educational institution at the holy feet of the Mother of the Khalsa.

Scope of BSc Nursing Post Basic in Canada – The demand for professional nurses isn’t restricted to India only. Candidates can seek a growth-oriented future in this paramedical field across global nations like the USA, Canada, Australia, New Zealand and many others. Inarguably, this guide is to stress the scope of PB BSc Nursing in … END_OF_DOCUMENT_TOKEN_TO_BE_REPLACED

Nursing College Organization Tips – So, you’re peeping around to find some valuable nursing college organization tips. This blog intends to help you capture top spots through projects without losing your mind. Nursing students will come across a stack of amazing tips and tricks to make the process easier and smooth. Arrange things systematically to … END_OF_DOCUMENT_TOKEN_TO_BE_REPLACED

Top Nursing Challenges In 2020 –  Being a high-pressure job, nursing as a career is best to choose. You have a lot of responsibilities as a nurse that is assisting in procedures, helping patients, updating paperwork, and much more. no doubt healthcare is incredibly important but also for nurses many problems cause issues. Well, there are … END_OF_DOCUMENT_TOKEN_TO_BE_REPLACED